New Importance for the Federal Government

"...The New Deal brought to the individual citizen a sharp revival of interest in government" (The New Deal and World War).

Nationwide suffering united Americans in a common cause. Through the New Deal, the federal government gained an abundance of power over local jurisdictions. By creating the numerous federally-run programs that were put in place in all the states, federal authority centralized their power and provided for a national dependency on their economic policies.

A satirical portrayal of the government's new ideas of spending to kickstart the country's economy (in reaction to the New Deal) by Cary Orr in 1934
The tenth amendment can be called into question when viewing the installation of these programs into local governments' domain, yet FDR's take-action approach to the economic situation, most widely known by the creation of the New Deal and its resulting programs, had a notable effect on the rehabilitation of America in the economy, society, and the betterment of the lives of individual citizens. 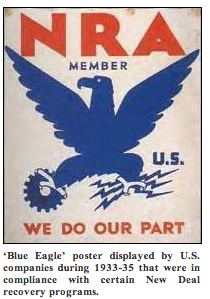