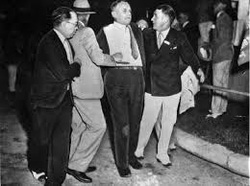 Cermak shot
On Feb. 15, 1933, Cermak was in Miami to meet with President-elect Franklin D. Roosevelt at Bayfront Park. Roosevelt was sitting in the back seat of an automobile when Cermak climbed onto the running board to shake his hand. Cermak was shot in the lung and seriously wounded when an Italian immigrant named Giuseppe Zangara attempted to assassinate Roosevelt, but hit Cermak instead. In addition to Cermak, Zangara’s shots hit four other people" (Chicago Cemetery Guide). Cermak was rushed to the hospital, but died the morning of May 6.

"According to newspaper legends of 1933, as Cermak lay mortally wounded he said to FDR, 'I'm glad it was me, not you'" (Anton Cermak).